We are asked to look at the work of some 17th century Dutch artists who painted still life and flowers and to make notes on the paintings that we  ‘especially admire’, also to find out more about the techniques that were used at the time. We should also research at least one painting that has iconographic significance and then explore the development of still life throughout the eighteenth, nineteenth and twentieth centuries – looking at how traditional still life subjects were dealt with in early Cubist paintings by Braque and Picasso. Then investigate how some contemporary artists are interpreting this genre. This is a massive brief and range of material to consider for one post, so I will therefore break this down into more manageable sections.

In my initial research, I soon discovered that there are millions of images and articles about 17th Century Dutch artists, in particular the flowers and still life subjects – it is almost impossible to hone in one or two to feature here without leaving out many hundreds more who some may consider more appropriate. I think it is important to understand the historical setting around the proliferation of flower paintings and I felt that the National Gallery explained it very succinctly:

At the turn of the 17th century, Netherlandish painters such as Jan Brueghel the Elder, Ambrosius Bosschaert, and Roelandt Savery were among the first artists to produce paintings that exclusively depicted flowers. The sudden emergence of this genre is undoubtedly linked to the development of scientific interest in botany and horticulture at the close of the 16th century. This period saw the establishment of botanical gardens in the Netherlands as well as a booming international trade in exotic cultivars. By the 1630s, speculative prices for the most coveted bulbs and flowering plants had reached spectacular heights – the so-called ‘tulip mania’. Prices soon crashed, however the Dutch enchantment with flowers endured.

The earliest flower paintings feature flat, symmetrical arrangements comprising flowers from different seasons. Over the course of the 17th century, bouquets became more relaxed, with asymmetrical rhythms and a willingness to overlap even the most costly flowers to create a more natural sense of depth. By the end of the 18th century, flower paintings were considered largely decorative, with a lighter palette more in keeping with ‘modern’ tastes.

Throughout the period, many artists favoured smooth copper or wood panel supports that enhanced the illusionistic perfection of their brushwork.

… In a culture that valued the exotic and unusual, tulips offered intriguing unpredictability: from one year to the next, and seemingly at random, a tulip might suddenly change into a plain or variegated variety. We now know that these flame-like streaks are the result of a virus infecting the plant, but in the 17th century these mutations seemed quite wondrous. Two of the most prized tulip varieties were the ‘Semper Augustus’, which was red with white striations; and the ‘Viceroy’, red with yellow flaming. Both of these costly tulips appear in Ambrosius Bosschaert’s Flowers in a Glass Vase of 1614. 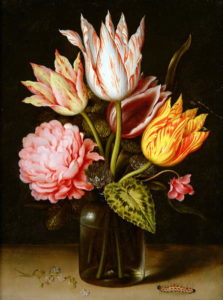 Ambrosius Bosschaert The Elder – Flowers in a Glass Vase (oil on copper) – NB:  this is not the one mentioned in the National Gallery article above but it features the same flowers.

I looked at a lot of work by artists like Jan Breughel and in particular found this painting by him very charming:

It would seem that this is a rather sensitive painting of wild flowers.  There’s no artifice in the arrangement of the flowers, it looks perfectly natural.  I think that’s why I like it.  The butterfly (I understand prevalent in a lot of flower studies of this period) is placed at the very top of the painting, resting on daffodils.  Butterflies apparently represented the soul.  Jan Breughel’s brushwork is energetic but controlled.  He is a master craftsman and his work really is beautiful and finely detailed.   It would have taken a long time to create this painting.

After looking at many hundreds of paintings online and reading up on the various artists’ biographies, I decided to look more closely at the work of Willem Kalf and Rachel Ruysch.

Willem Kalf (1619-1693)  (This short bio from The Culture Trip website)  Although working in still life, considered the lowliest form of painting according to the traditional hierarchy, in our more democratic age many have called him the Vermeer of still life due to his expertise in depicting light. By painting so-called ‘ostentatious still lives’ (from the Dutch ‘pronkstilleven’) featuring selections of opulent objects, Kalf perfectly demonstrates his technique from a selection of shiny, glittering or glassy objects, as can be seen in his finest work Still Life with Drinking Horn (c. 1653), housed in London’s National Gallery 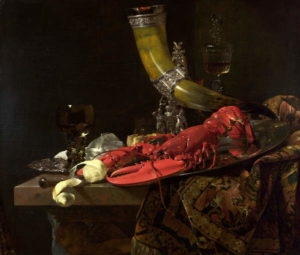 I’m sure the reason why I like Kalf’s work so much is his fascination with all things sparkly and opulent!  He just loved to paint ‘bling’. What I found so wonderful about the painting above was not so much the horn, or lobster and how they sparkle but how he has painted the goblet.  The light comes from the lower left and filters through the bottom of the glass onto the white napkin behind … it glows with sunlight.

Another painting that features Kalf’s masterly portrayal of light glancing off exquisite objects – especially the nautilus shell – is this one:

Another artist who rose to prominence during this time, despite her gender was Rachel Ruysch.   This extraordinary woman started her career as a painter during her teens, no doubt following instruction from her father, who besides being an amateur painter himself, was also a professor of anatomy and botany. Her works were bought by wealthy patrons in the Netherlands and after her marriage to the portrait painter, Jurjaen Pool, she moved with him to The Hague.  There, under the Guild of St. Luke, her career blossomed.
Her painting, ‘Peonies, Roses, Lilies, Poppies and other flowers’ was created close to the end of her long life. She died aged 86, after having born 10 children.

I find this painting interesting, as it is not your standard still life with flowers, it is set in the outdoors. The arrangement of flowers is highly stylized though and would not be found typically in nature.  She has included the requisite butterflies, but also mushrooms and small reptiles.  There is a landscape in the background.  What was she trying to say here? I’d like to think that she was sticking her middle finger up to the establishment – somehow saying that she’d always wanted to paint landscapes but because of her gender and societal norms, she was forced to paint pretty pictures of flowers.  Just for the heck of it, I think she said, ‘I’ll set this in a landscape and instead of jewellery and fine fabrics, I’ll stick in some reptiles.’  I’m very intrigued by this painting.